Dubai driving test how I dealt with Ambulance 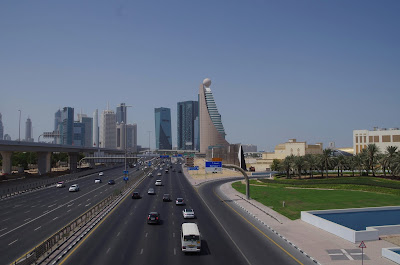 Good day to all! I passed my RTA road test in Belhasa Al Wasl today.

I would like to share how my test went. My test started at 9 AM and the RTA examiner called us. He looked very strict and serious.

There were 3 guys 1 Pakistani, 1 Indian and me (Pilipino). The Pakistani guy went first and he drove the car out of the parking bay. This is his 7th attempt taking the road test and he looked very nervous. This resulted in him committing the mistake of not checking the rear view and checking the back side when reversing the car and didn’t notice the people crossing the street and did very badly which angered the RTA examiner saying "Excuse me what are you doing? Did you just open your file?" and he said it was his 7th attempt. He continued reversing but it was abrupt. As expected as soon as we left the compound the RTA examiner asked him to do emergency parking and asked for the next driver.

The 2nd one, Indian guy, was next. In my opinion, he did well but sometimes he forgot to use indicators and stayed completely in the fast lane/overtake lane and forgot to change lane to right and this will be ground for immediate failure. His driving lasted for 7-8 minutes and when he was asked to do emergency parking he parked diagonally and not parallel to the road and he turned off the engine instead of putting in hazard and forgot to put the steering wheel in straight position.

I was the third one to drive and RTA examiner asked for my name. I answered and greeted him good morning politely. He immediately told me "Yallah, go!" but I insist on doing the pre drive checks first (doors,seats,seatbelts,steeringwheel, side/rearmirrors,etc.).

I was really nervous as RTA guy looked strict but I pretended to be confident even if my foot was shaking a bit haha and remembered I am doing this for my family and to find better job.

I drove to the lane after doing the proper procedure for moving out of parking and as soon as it is clear I change to right lane as it is not allowed to sit on left lane if there was no instruction, not overtaking and not going beyond the speed limit.

He asked me to do right turn to the slip lane and I was driving at around 60km/h (speed limit) on the internal road and as I was approaching the bend I slowed down at 40km/h and used right indicator. He got angry and said "Why did you slow down?" and I replied back "Sir, we are approaching a bend so I must slow down". He said "Ok, but we are not going at 1000 km/h why did you slow down we are still far." I still move at the proper turning speed of 40km/h and sped up to merge with the freeway after checking that it is safe. He asked me to change to left lane at 100km/h and after making sure left lane is clear I completed the maneuver. After a few seconds there was a right turn and he immediately asked to take right turn. I was 3 lanes away from the right lane and going at 100km/h but I remained focus and checked lane by lane if it is clear to turn to right lane without slowing down, as they will consider slowing down when changing lane major fail, and kept up the speed.

I only slowed down when I was nearing the right turn. I was then driving at two way traffic lane and driving smoothly from 40-45km/h while checking the T junctions if any incoming cars, checking rear mirror every 5 seconds and scanning the sides.

How I dealt with ambulance during my test!!!

then suddenly a counter flowing ambulance is in front of me from the opposite direction! I was surprised as the cars in the left lane didn't even seemed to bother to give way to the ambulance in front of me so the ambulance was coming straight at me. I immediately slowed down and moved a bit to my right crossing the yellow lane and put the car on hazard. I became a bit distracted and thought I was immediately failed as examiner then touched the steering wheel but I still continued. He asked to take right turn from roundabout but a Belhasa student driver was coming from the left without any light indicator at all so I waited for him but he took a right turn. RTA Examiner got angry and said "Why did you wait for him? It is obvious he is going to take right turn." and I then replied "Sir, he is still a student driver and he has no indicator at all. He might make mistakes and go straight". RTA Examiner "Ok, but you should not hesitate as it is obvious he will take right turn" I thought this was another major failure and I answered "Ok sir, understood sorry". I kept on driving and parked the car back at Belhasa and dare I say my parking was flawless haha. I practiced a lot in parking and was really confident with how I parked the car.


We all went back to waiting area and I thought I did great but failed due to the ambulance and round about incident. A few minutes, the 1st and 2nd guy received their results and it was fail. I waited for quite some time and got my result. I drove for 21 minutes and got surprised that I passed the road test! Thank you so much to this site! I learned a lot about the road test from other people. I pray that the other guys will learn their lesson and pass the test next time.