There are many holy sites other than Masjidu-e- nabawi which we most of us really don't know. Following explain you some of the sites that you can visit in your next visit.

This mosque is the first mosque in the history of Islam. The Holy Prophet (peace be upon him) himself laid down its foundation stone during his stay there before arriving at Madina Munawarra.

Location -  Three kilometers away from Masjid-e-Nabvi, south of Masjid-e-Nabvi.
Reward - A Hadith states that offering 2 rakats of Nawafil prayer in it is equal in blessings and reward to one Umrah.
Other features - Exceptional masterpiece of architecture. 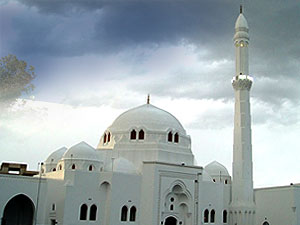 Holy Prophet (peace be upon him) offered prayers  moved from Quba to Madina Munawarra. When he reached the location of Bano-Salam-Bin-Auf tribe on his way to Madina City, the time for Jummah (Friday) prayers came, so first Jummah prayers were held here at that place and afterwards a mosque was constructed at the same spot.
Location -  It is situated south of Masjid-e-Nabvi.

Those Muslims who were having ties with Non-Muslims and Jews of Madina built this mosque and all planning was done here in order to cause harm to the true followers of Islam and Holy Prophet (peace be upon him). To save Muslims from the harm of such people this mosque was destroyed and burnt on the orders of Holy Prophet (peace be upon him).
The ruins of the mosque are still present .

Location -  This mosque was built at a point twelve kilometers outside the city of Madina Munawarra declared as Meeqat for pilgrims.

Here a well is present which is called Ali's Well and the place is also called as Abyar-e-Ali.

This mosque is situated at a walking distance from Masjid-e-Nabvi, and here Prophet Muhammad (peace be upon him) offered prayers for rain. Saudi government has made a very beautiful pink wall around the mosque and the wall is well decorated with electric lanterns hanging with date tree planks. It is also called Masjid-e-Eid because the Prophet Muhammad (peace be upon him) and companions used to offer the Eid prayers here.

Just 40 yards away from Masjid-e-Ghamama, this small mosque is located. It is believed that first Caliph used to live here and after his house was demolished this mosque was built at the exact same site. This mosque is not in a good shape and authorities have not paid much attention towards it. This mosque requires extensive repairs and maintenance. It is located towards southwest of Masjid-e-Nabvi. It is also believed that this mosque has been built at the same location where first Caliph led few prayers during his tenure as Caliph.

This is the area where the Prophet (PBUH) along with his companions dug the trenches to prevent the enemy, the non-Muslims, from entering Madinah. Although the trenches have been replaced by a metal road now.

You can book hotels at your own convenience in Madinah. Few of the popular hotels are below.
>>More hotels
Source : http://hubpages.com/travel/holy-places-in-madinah will be updated.
Thanks for reading. Like our facebook page to get regular updates

Umrah vaccination - things you should know as pilgrim

Real Ramadan offers, you dont want to miss out

how to do funeral prayer in islam

How to perform Umrah - Step by step guide