Things you should know about speed in Dubai driving test. 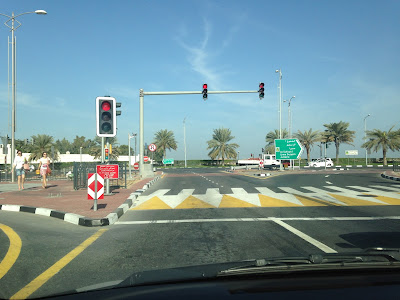 Do you know the speeding is a big reason for various accidents in UAE?

Yea it is true. As per survey done by agency roadsafetyuae it is the number one reason for the major accidents. And 69% of the respondents said major reason of the speeding is due to running late to office. So these road users are not obeying the speed limit of that particular roads. Some of them have different excuses like to please the co-passengers.

Do you know how much speed you can drive on freeways?

You can immediately answer by saying the maximum speed limit sign whether it is 100/KMPH or 120 KMPH. But have you noticed in freeways there is a minimum speed limit also. It will be 60KMPH almost all cases.

There is an unwritten rule in the freeway is the leftmost lane is high speed lane. If you would like to drive in lesser speed you can take the right most lanes. You can see 5 or 6 lanes in Freeways in one direction.

left most lane - if the road is 120KMPH the right most lane people will be for who is driving 120 to 140 KMPH. You might be wondering how can someone drive above 120 KMPH yes that is happening in Dubai roads every moment. I am explaining about that in a moment.

2nd left lane - You can spot vehicles driving in the range of 100 to 120 KMPH on this lane
3rd left lane - 90 to 100KMPH. Mostly less experienced drivers choosing this lane.

Also exit and entry ramps on the freeways are mostly seen here. So if you planning to drive on these lane you should ready to face these road users.

Two way roads have maximum speed limit is 40KMPH
Near schools - What ever highways or two way roads the road speed limit will have 40 KMPH and will be having the school sign, so you have to be very cautious driving on these places


- Do not fall into distractions like using mobile phone while driving it makes you slow down the vehicle and it will lead to issues to the vehicle behind you and cause accidents.

- In uae roads the speed cameras will flash after the buffer speed of 20KMPH, that means if the maximum speed is 120KMPH people will get high speed fine from 140KMPH onwards. So even if you obey the speed limit cars will come behind you and start flashing.

Issues occurring in the final test

We should drive in the speed limit of the road while on your RTA driving test. You should not drive above speed limit. Some time examiner will say to drive fastly that time you can drive little more than speed limit.

- You have to reduce your speed gradually while exiting from highway. This should not be sudden stop without jerking the vehicle. Normally candidates either stop immediately or forget to reduce speed some cases which will cause loss of car control.

- Also while entering highway you may be entering from the side road which is 60KMPh speed limit and you are entering the highway which is 120 or 100 speed so you should speed up into the road speed immediately to avoid any collision with the car in the same lane.

On my daily driving I am facing different challenges related to speed.

- On high speed track you cannot drive in the speed limit, it should be +20 always otherwise cars will come and horn or flash, So normally I am avoiding high speed track.

- In the multi lanes road if you are driving in the lesser speed you have to choose less speed lanes. you can see some time people driving very slowly in the high speed lanes which will cause issues and people need to overtake always it will make the traffic worse.

You should always drive in the speed limit and watch out for warning signs for schools, pedestrians and should drive accordingly
Thanks for reading. Like our facebook page to get regular updates