Your driving license journey take off with passing RTA theory test. Yes, it is an important step.

Once you pass the test, RTA will issue the learning permit.

Primarily this aims to check the theoretical knowledge for the candidate. Included various topics covered in your theory lectures.

Focuses to evaluate candidate awareness about safe driving. Test will be conducted in your driving school itself.

Should be punctual to the test and well prepared. Arrive the test center 30 minutes prior to the test time and you can place your belongings in the locker available.
Your awareness to the various Road signals you can come across while driving in the road is an important topic in this test.

How to prepare for the Theory Knowledge Driving Test.?

Do you know what is the big mistake candidates doing?

Yes, they will underestimate and will not prepare for the test.

The test may sound easy but it is not right in reality. It will be tough and you cannot predict what kind of questions will be asked. So you have to give do enough preparation for the test. Otherwise the result will not be the one which you wishing for. so prepare. How to prepare?

Your driving theory classes might be boring but be attentive as you are going to learn a very important skill so the knowledge also very important. For example if you driving in a highway you come across various signal boards. How can you identify those sign and accordingly? The theory classes is the answer.

Sample tests will give you an opportunity to evaluate yourself before proceeding to the RTA test. These tests known as mock tests.

We are providing RTA mock tests of 10 questions each as different sets. This will help you to get some idea about how the questions will be. No guarantee the same question can appear for the real test. See some of the sample questions. 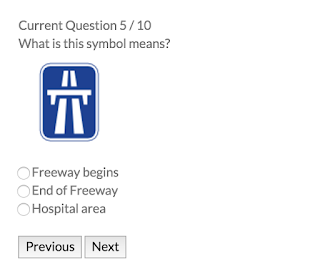 The test also provides a review screen where you can find which one is right or wrong and you can correct it accordingly.

This test allows you to take based on the topic and once you are familiar you can take it as the mock tests. 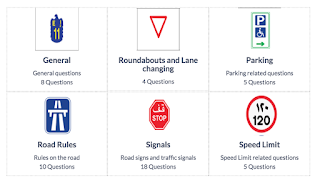 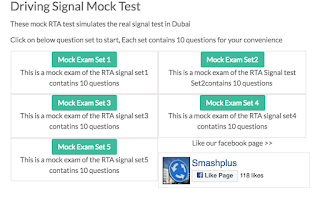 Relatively RTA theory test is easy and most people pass it the first time. But Students should have good theoretical knowledge to pass the test.
Please let us know how much helped the RTA Knowledge mock test on your test preparation.